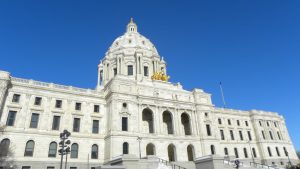 The Minnesota Legislature is heading towards its adjournment date of May 21 with a long list of items on its to-do list. In the next two weeks, the Legislature wants to pass — and to have Governor Dayton sign — spending and policy changes in all areas of state policy, a bill conforming Minnesota taxes with the new federal tax law, and a bill bonding for public works projects.

Contained in that mix are the energy bills that CUB has been watching this session. The energy bills that move forward could do so on their own or as part of major budget and policy “omnibus” packages, and key negotiations typically come down to the final weekend of the legislative session.

Here is the latest update on the bills we’ve followed.

This bill (HF 3708/SF 3504) would allow Xcel Energy to more easily charge customers for spending and profits related to its nuclear power plants, without the normal regulatory review. The bill has been amended as it has moved through House and Senate committees and a House floor vote, but significant issues remain for consumers. Utilities find it notoriously difficult to predict the costs of nuclear power plant upgrades, and these projects regularly run hundreds of millions of dollars over budget. Fundamentally, this bill reduces the risk of cost-overruns for Xcel and its investors, and shifts that risk to customers.

The House added this bill into the omnibus bill it passed Thursday night (SF 3656), so it’s now headed to a conference committee. Governor Dayton has spoken out strongly against the bill, and CUB has opposed it, along with advocates for low-income and senior Minnesota, the Minnesota Chamber of Commerce and representatives of large industry, and environmental and clean energy groups.

Bills carried by Senator Pratt and Representative O’Driscoll (SF 3245/HF 3688) would allow for residential Property Assessed Clean Energy (PACE) financing, so that homeowners can get loans for energy improvements through a lien on their homes, with strong consumer protections. CUB supports these bills, and they are continuing to advance on their own through the House and Senate.

The Clean Energy First Act (SF 3716), carried by Senator Senjem, would require that, before an electric utility could get approval to build a power plant, it must first analyze if it can meet its needs reliably and cost-effectively with clean energy resources. It is a common-sense way to maximize carbon-free energy without any additional risk to the electric system or to consumers.

This bill did not receive a hearing.

Watch CUB’s Twitter feed (@CUB_MN) over the next two weeks for the latest updates on bills that affect utility consumers.