Minnesota Power customers could be paying an average of $225 more than last year for their electric service. Customers who use more electricity than average, including people with electric heat, would see higher increases. Customers that use the least energy, many of whom are seniors and lower-income families, would have the highest proportional rate increase.

That’s if state regulators approve a general rate increase requested by the utility, on top of a coming increase that will be used to subsidize electricity for 11 energy-intensive, trade-exposed (EITE) industrial customers.

The PUC wants to hear from you. Public comments are being taken through July 3 and at meetings around northern Minnesota next week.

Comment in person: At these public hearings, you can comment in person in front of the administrative law judge who’s hearing the rate increase request.

A comment can simply be your opinion about how a rate increase will affect you, or it can be your opinions about how the utility is handling its costs, renewable energy, or other matters. You can contact us if you have any questions or would like some help with what you’ll say in your comments.

Breakdown of the two rate hikes

In addition to increasing rates, Minnesota Power is proposing to consolidate its tiered pricing. Currently, customers pay the lowest rate for their first 300 kWh of usage each month, then the rate increases over four additional usage tiers. The utility would like to change that to just two tiers, resulting in a very substantial rate hike for that first 300 kWh. In addition, it has asked for a $1 increase in customers’ monthly fixed charge. Both of those proposal would reduce the amount of money customers can save by using less energy, so reduce people’s reward for being energy efficient.

The Minnesota Department of Commerce, after analyzing the utility’s financial information, is recommending an overall decrease in rates through. The final decision will be made by the Public Utilities Commission (PUC), probably early in 2018.

We believe Minnesota Power should pursue more renewables, and should be cautious of investments in natural gas generation. One piece of good news is that renewable energy is saving Minnesota Power customers money. Wind power is the cheapest source of electricity today. And renewables don’t require any fuel, so the price is locked in from day one. The more Minnesota Power invests in natural gas, the more customers will be at risk from future volatility in the price of fuel. Finally, CUB is looking hard at Minnesota Power’s proposed program for pilots to modernize the electric grid through new technology and similar measures. Grid modernization can benefit customers and the environment — but costs can far outweigh benefits if it’s not done correctly.

EITE increase: $48 a year for the average customer

The EITE proposal has been approved by the PUC. Minnesota Power has not yet announced when it will appear on customers’ bills, but it could come this summer.

Here is a breakdown of how Minnesota Power customers could see their bills change, from Buddy Robinson at the Minnesota Citizens Federation Northeast. This chart shows the that total bill impacts for customers who use a low, average, and high amount of electricity. 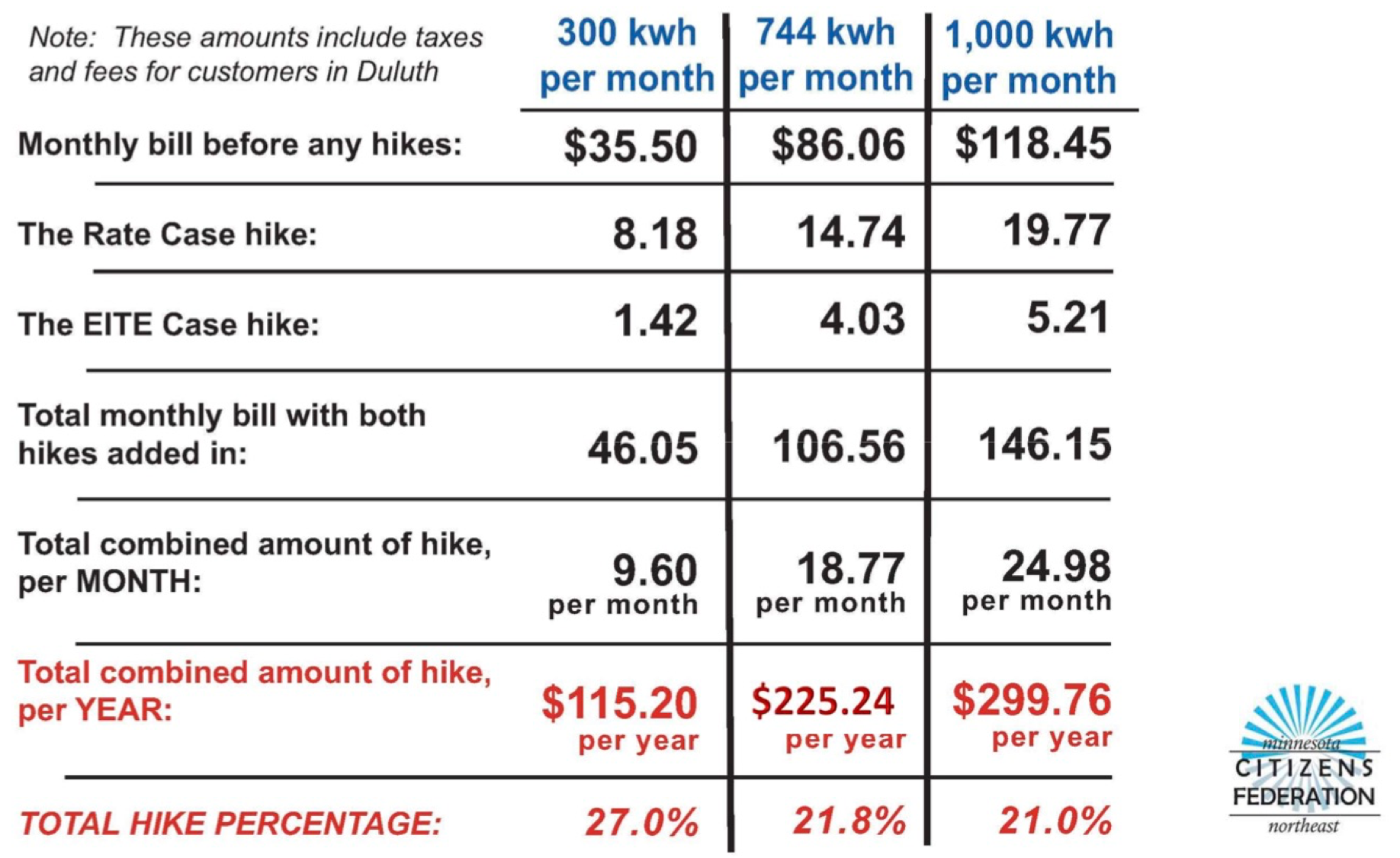