Minnesota Legislature: Report from the end of session

The Minnesota Legislature wrapped up its work at about 11:50 p.m. last Sunday before a 12:00 deadline. While the session was marked by a lack of progress in many areas, it concluded favorably on a number of issues affecting energy consumers.

Here’s a report on the outcome of CUB’s legislative priorities this year, as well as energy provisions that were contained in the vetoed omnibus supplemental budget bill. 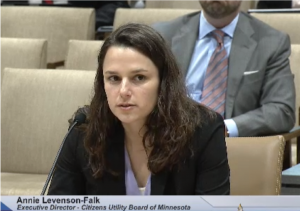 This bill would have created a special process, making it easier for Xcel Energy to charge customers for spending on its nuclear power plants.

As originally introduced, the bill would have allowed Xcel to charge customers for whatever the utility proposed as “expected costs,” including profit, with no ability for the Public Utilities Commission (PUC) to oversee that spending.

While the bill was amended significantly throughout the legislative session, strengthening that PUC’s oversight role, the final version still had the effect of transferring financial risks from Xcel and its shareholders to captive customers. (For more information, see a May 18 letter to the House author from CUB, AARP, and MN Citizens Federation NE.) CUB was among groups seeking a compromise that would have included benefits for the public interest, but in the end, no compromise was reached.

Facing opposition from consumer groups, businesses, large industrial energy users, and environmental groups, the bill did not receive its scheduled vote in the House on the final day of session.

Passed and signed into law

This bill reauthorizes residential Property Assessed Clean Energy (PACE) financing with strong consumer protections. Entities may now launch residential PACE programs, offering energy improvement loans to homeowners through liens on their homes. The bill was brought by members of a a task force appointed by the legislature in 2017 to examine how to allow for residential PACE with adequate protections for participating consumers. CUB participated in that task force and supported this bill.

Two bills in the House would have reduced the number of utilities and large energy customers required to participate in the Conservation Improvement Program (CIP). Under CIP, utilities provide rebates on energy-efficient appliances and deals on home energy audits to help their customers reduce energy waste.

CUB joined the Minnesota Chamber of Commerce, Center for Energy and Environment, Clean Energy Economy Minnesota and various trade groups in a letter opposing these bills and defending CIP, which has saved Minnesota energy consumers an estimated $3.5 billion since 2007. CUB is participating in a study led by Center for Energy and Environment that is examining the potential for cost-effective energy efficiency in Minnesota and will inform CIP’s future.

These bills did not receive a hearing.

The Clean Energy First Act, introduced in the Senate, would have required public utilities to analyze if they can meets their electricity needs reliably and cost-effectively with clean energy resources before getting approval to build any new fossil fuel power plant. The bill would also have required utilities to plan to ease the transition for workers and communities impacted by coming power plant retirements. CUB supported this as a common-sense way to maximize carbon-free energy without any additional risk to the electric system or consumers.

The bill did not receive a hearing.

In addition, the Legislature passed a nearly 1,000-page omnibus supplemental budget bill, containing provisions related to all areas of state spending and policy. On energy, the bill would have:

The omnibus bill was vetoed by Governor Dayton, and the above provisions will not move forward.