That’s the conclusion of a landmark study by our sister organization to the southeast, the Illinois Citizens Utility Board.

At its most basic, electricity rates are based on costs. The costs to operate a utility system are divvied up among classes of customers, based on the amount of costs that each customer class imposes on the system, then those costs are divided into rates charged to customer per kilowatt-hour of energy they use. (In reality, factors like simplicity, continuity, and affordability are important to consider, too.)

Though most people pay the same rate for each kilowatt-hour of electricity they use, no matter when they use it, the actual cost of energy varies greatly throughout the day and the year. When demand is low, the cost to generate and deliver is generally low. Utilities can use low-cost renewable energy and their more efficient power plants, and there is enough capacity on the transmission and distribution systems to accommodate the amount of electricity that needs to travel over power lines. When demand is high, costs can skyrocket, as utilities have to turn on their least efficient plants and even build more infrastructure to accommodate peak demand.

The use of energy on peak hours contributes an enormous amount of the total cost of energy for a utility and customers. Reducing peak usage can lower costs for everyone.

The Illinois CUB crunched data from 2.5 million customers of the utility that serves the Chicago area, Commonwealth Edison (ComEd). Their analysis grouped customers into clusters based on the amount and timing of customers’ electricity use on an average summer weekday. They found that customers generally fall into one of six typical load shapes, ranging from nearly flat loads – indicating that customers use about the same amount of electricity 24 hours a day – to high-use, very peaky loads – customers who use a lot of energy overall, and especially during peak demand hours in the late afternoon and early evening. Then, the analysts looked at where customers in each of the six clusters lived, and correlated that with demographic data from the census.

They found that low-income customers were far more likely to use less energy during peak hours. (Low-income households fell most often into Cluster 2 and Cluster 4 in the chart below.) In other words, low-income customers on the whole use less of the expensive, on-peak electricity than the average residential customer.

That means that low-income customers on flat electricity rates on the whole pay more than the cost of providing their electricity.

Low-income customers already pay a much higher portion of their income on energy than average households. A number of programs have been created to help address this problem, by providing assistance to low-income households through reduced rates, federal heating assistance, weatherization, and other means. Generally, these policies are in place because it is seen as a social good: energy is a necessity of life, and we as a society have decided to help people who cannot afford it. 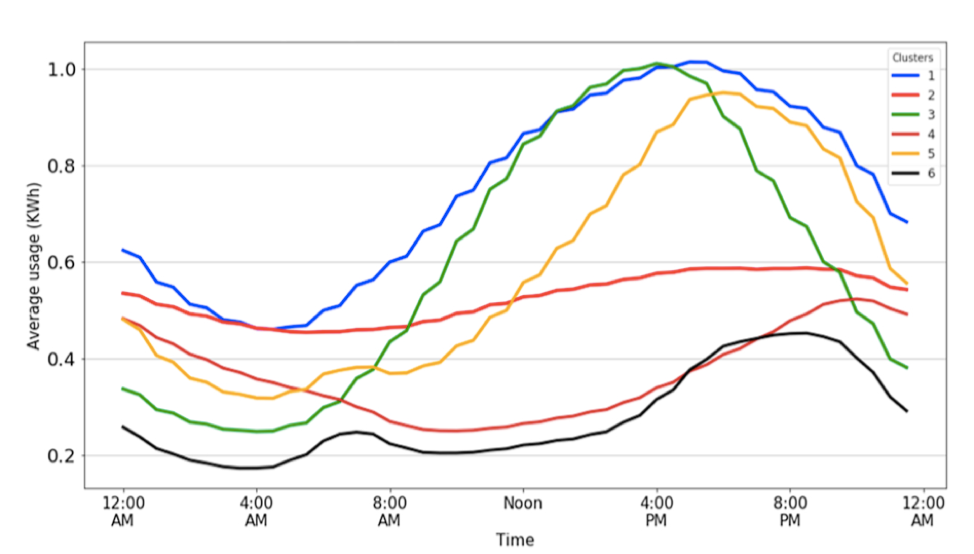 However, this study suggests that low-income rates could be lower – not to provide assistance, but simply because low-income households are being overcharged. In fact, it suggests, low-income households are currently subsidizing all other residential customers. Additionally, if low-income customers paid a different, lower electric rate, it would be simpler for utilities to also exempt them from other charges where it is justified, such as paying for programs that low-income customers generally do not use. (This might include something like incentives for electric vehicles or rooftop solar.)

It is not yet possible to do a study like this of customers of Xcel Energy or Minnesota Power, Minnesota’s largest electricity providers. The analysis used customer energy usage data in 15-minute increments, data collected by advanced metering infrastructure (AMI) that isn’t yet fully in place Minnesota. However, we have every reason to expect it will be available soon. Minnesota Power expects its system to be ready within a couple of years, and Xcel is expected to bring forth a proposal for AMI within the next year.

As this example shows, the analyses that can be conducted with the data from AMI can be incredibly valuable.

That’s why the Citizens Utility Board of Minnesota has filed a petition with the Public Utilities Commission asking the PUC to set clear standards under which such data will be available. We strongly believe that an Open Data Access Standard would enable research and analysis that can show us how to fairly price electricity, reduce waste, cut emissions, and save consumers money.

2 Responses to "Illinois CUB study: Low-income households are charged more than their fair share for electricity"