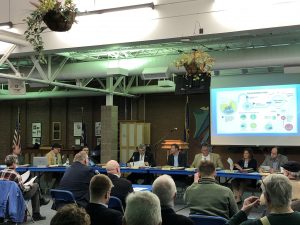 As the name suggests, the bill would require utilities to use clean sources of electricity unless they demonstrate that to do so would increase costs of make the electricity system unreliable. The bill follows the basic framework of a state law that has been in place for nearly 30 years prohibiting a new non-renewable energy facility unless a utility has first demonstrated that using renewable energy is not in the public interest. Clean Energy First would expand the types of clean energy that must be considered. The bill also includes provisions to increase the local hiring to build clean energy resources, to help communities transition where power plants will close, and to plan for electricity transmission needs.

This version of the bill resolves a great deal of the problems with last year’s bill, which would have increased electric rates for reasons unrelated to clean energy by shifting a half billion dollars from the state’s largest industry onto ratepayers’ bills. In this draft, most of that language has been removed.

However, some provisions of the bill remain that will increase electricity rates or otherwise be harmful to Minnesota consumers. I testified to the committee yesterday to share CUB’s concerns, including the following.

One piece of language still remains that would increase utility rates. The bill would require rates to be based solely on cost of service, prohibiting any consideration of whether rates are affordable for low-income Minnesotans, whether they account for varying levels of risk imposed by different types of customers, whether they promote efficiency in line with the requirements of state law, or other considerations. This would lead to higher utility rates for Minnesota residents, and it’s unrelated to the Clean Energy First purpose.

Under this version of the bill, the Clean Energy First framework would apply only to electricity resources that are located within the state of Minnesota. This means that consumers could end up paying for power plants located outside Minnesota, even if a cleaner option might be more cost effective. Clean Energy First should follow the example of long-standing Minnesota law and apply whenever a Minnesota utility uses its Minnesota customers’ money to buy electricity. This loophole should be eliminated.

CUB has a number of other concerns that we detailed in this letter to committee members.

We are working with senators from both parties to try to resolve the problems and create a bill that advances clean, affordable energy for Minnesotans. The committee will discuss the bill again on January 22nd in Minnetrista (details here). Watch this blog and our Facebook/Twitter pages for updates throughout the legislative session.