Jim Bowler, a retiree from Coon Rapids, noticed something was off with his electric bills earlier this year. Now he’s getting a refund for months of overpaid taxes – and if you have solar or wind power at home, you could be due a refund, too. 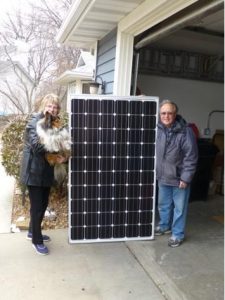 Jim has solar panels on his roof. Every month, his utility counts the total amount of electricity he used, subtracts the amount that his solar panel generated, and charges him for his net total usage, under what’s called “net metering.” Previously, the utility applied taxes only to that net total. However, in July, the utility started applying taxes to his gross usage, costing him about $9 or $10 more each month. This was in line with guidance issued by the Minnesota Department of Revenue on how to properly apply state taxes, but Jim wasn’t convinced.

Jim called a friend, and his friend called CUB.

Jim was right. Each utility bill is a single transaction, and taxes should only be applied to the net total energy usage on each month’s bills. Net metering is somewhat complicated and had been fairly uncommon in the past, but more and more customers are installing renewable generation on their properties.

After a lot of work among the tax experts and the energy experts in multiple state agencies to share knowledge, the issue was resolved in Jim’s favor. The Revenue Department has changed its guidance to utilities, to apply taxes after netting out each month’s electricity generation and use. In addition, Jim is eligible for a refund of the taxes that he has overpaid.

Jim isn’t the only consumer affected, and for some people, the error goes back much farther than just this year. Glen Jacobsen, an assistant Renville County attorney, estimates he’s due between $1,200 and $1,500 for the more than 10 years his solar panels have been installed.

If you get credit for wind or solar generation under net metering, check your bill to make sure tax is being properly applied – or if you’re also due a refund. If you have any questions, feel free to contact me or anyone at CUB, and we’ll help you get to the bottom of it.