Though the Legislature had been meeting since January 3, almost all of this year’s bills were passed in “omnibus” packages in the final days. After a contention four-day special session, Governor Dayton signed major bills into law on May 30th.

Overall, CUB believes the Legislature has left energy consumers worse off, particularly people in rural areas. However, thanks to work by us and others, some of the worst proposals were fixed or taken off the table. 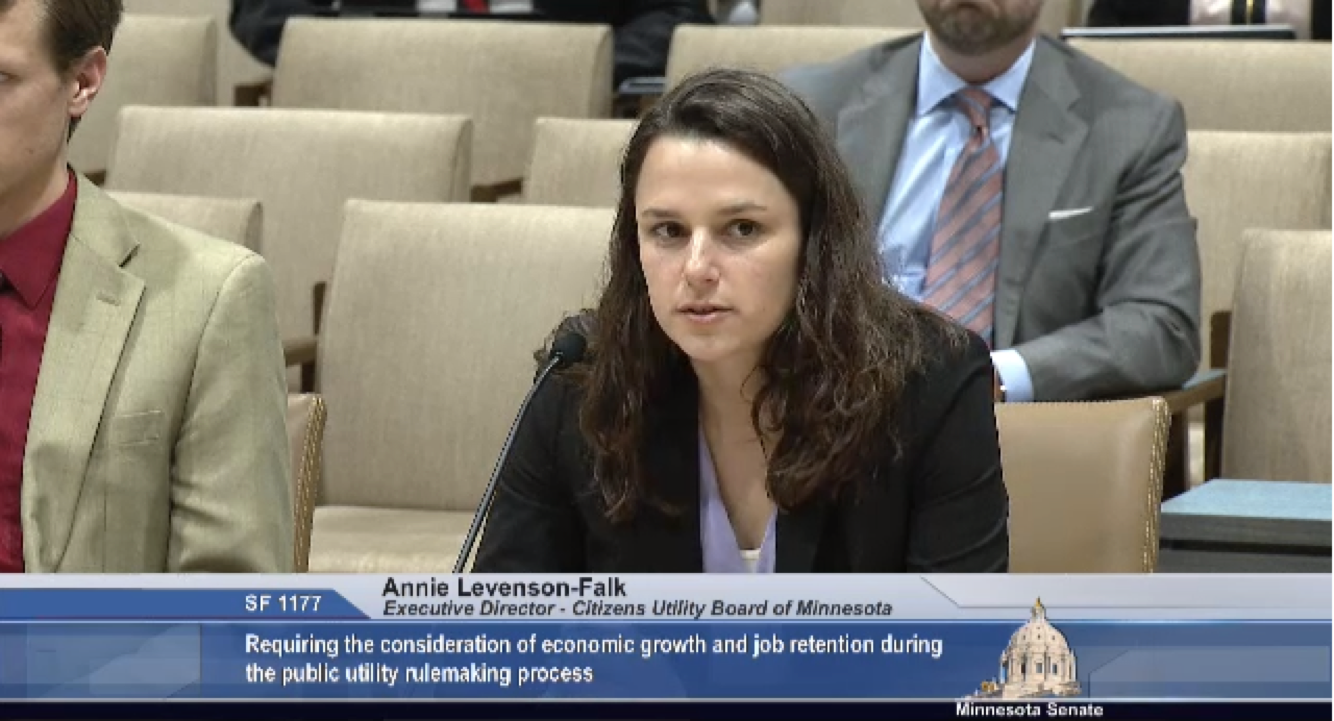 * Expedited process for Xcel natural gas plant. In February, the Legislature passed and Gov. Dayton signed a bill that allows Xcel build and own a new natural gas power plant at the Sherco plant in Becker, Minn., without going through the normal regulatory process.

The final bill was much improved because of CUB’s work. We joined with the large industrial customers and others to strongly oppose an earlier version of the bill, which would have let Xcel charge its customers for a power plant of the size and cost it proposed. Investor-owned utilities like Xcel are normally required to prove that any big investments like this are the most cost-effective energy options, because utility customers are on the hook for the costs, and utility shareholders earn a rate of return on capital investments.

Because of our work, Xcel now must get permission from the PUC to charge customers for the new power plant, and it will only be able to pass along costs that are “reasonable and prudent.”

CUB will be watching the next steps at the PUC. If a mix of energy efficiency, renewable energy, and “demand response” that can help people shift their usage away from peak periods would be cheaper than natural gas power generation, Xcel should build a smaller power plant.

CUB strongly opposed this provision. People in rural areas should have access to these programs, just like people in larger cities. The programs help consumers reduce energy usage, save money, and reduce emissions, and they help utilities save money, because it’s often cheaper to conserve than to purchase the energy that would have otherwise been used.

* Setting a state goal that electric rates be 5% below the US average. Electricity should be affordable, but this policy isn’t written in a way that will be effective. The focus on rates instead of customers’ total bills could prompt utilities to put more costs into fixed monthly fees — which customers can’t control by conserving energy. And we don’t want to encourage utilities to put of needed investments or stop good innovation in order to keep rates lower in the short term, because that could be much more expensive in the long run.

* Increasing consumer protections in the residential Property Assessed Clean Energy (PACE) program. PACE programs let people pay back energy improvement loans through their property taxes. In Minnesota, PACE has been working well for commercial properties, and CUB is interested in it as an option for homeowners, too. However, consumer protections are needed before PACE loans are sold to residential customers. The bill puts residential PACE on hold until consumer protections can be put in place, and names CUB to a task force to address the issue.

* Prioritizing large business rates and status quo energy jobs. Economic growth and jobs are important considerations — but this language would have prioritized low utility costs for business above residential affordability, large businesses over small businesses, and status quo energy jobs (e.g. in expensive coal plants) over jobs in the renewable and efficiency industries or other businesses that would benefit from cheaper power generated from other sources.

* Eliminating certificate of need for large renewable energy projects and pipelines. Without certificate of need, Minnesotans would have been on the hook for expensive, decades-long investments without knowing whether those investments were actually cost effective. Renewable energy is an excellent resource for consumers, but these provisions would have eliminated a significant protection for customers of monopoly utilities.

4 Responses to "2017 Legislative Recap: Moving backwards on energy, but worst bills were prevented"