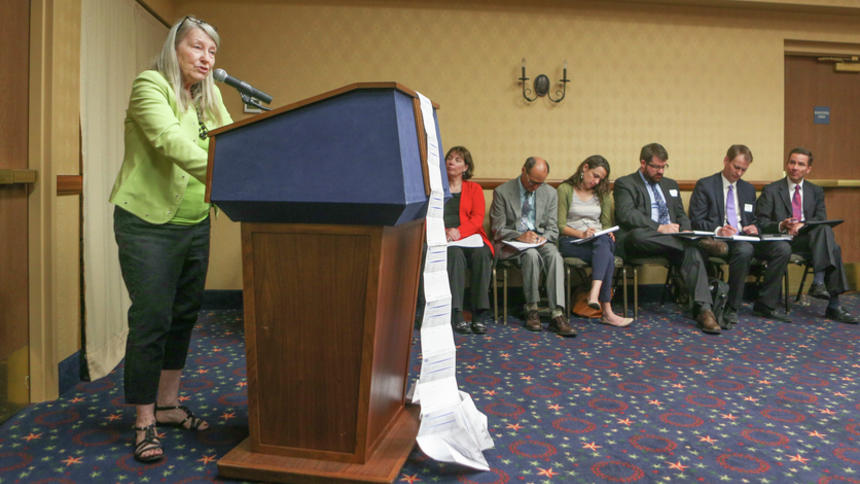 Bashed in recent weeks by the state attorney general, the state Department of Commerce and the mining industry, Minnesota Power’s proposed electric rate increase this week was opened to bashing by the general public as well.

The Minnesota Public Utilities Commission is holding hearings on the Duluth-based utility’s plans to raise electric rates — by 15 percent for residential customers — to cover the cost of large projects completed in recent years and to bolster its rate of return for investors.

At hearings Tuesday afternoon and evening in Duluth, residents lined up to criticize the rate hike as too much of a burden for senior citizens and low-income residents About 75 showed up for the afternoon session; about 20 were on hand in the evening.

“When the power cost goes up but your salary doesn’t, what do you do? You have to cut someplace,” said Dwight Morrison of Hermantown, a member of the Minnesota Citizens Federation.

Lynne Pickart of Duluth called herself the poster child for opposition to the rate hike. At 74, she said she lives on Social Security and scrapes by. The electric bill for her 1937-vintage house is already $122 per month and would go up by another $25 under the Minnesota Power proposal.

“Please don’t let Minnesota Power build this rate increase on the backs of the poor,” said Pickart, who unfurled a paper banner of 12 months of her electric bills taped together. “I know people who are living in the dark practically just to keep their rates down.”

While large industries such as taconite plants and paper mills got an electric rate cut in 2016, the new proposal would nearly wipe that out. Guy Priley of Duluth, an employee of the Verso paper mill in Duluth, said the mill faces stiff global competition for its glossy paper and that a rate hike could make the difference in whether the plant can operate at a small profit or shut down, putting 250 people out of work.

“We believe this rate increase is excessive,” Priley said.

Faye Witt of Duluth cited a Minnesota Department of Commerce report that said Minnesota Power’s request for a 10.25 percent rate of return, or profit margin, was too much. The state agency suggested a rate of return of about 8.7 percent for the utility.

“I’m making one-tenth of 1 percent” on certificates of deposit at the bank, Witt said in opposing the rate hike.

But not all testimony was against the rate increase. Several business, community and labor leaders said they support the plan to help Minnesota Power remain a vital player in community and economic development and to continue toward renewable power sources such as wind and solar.

“They need resources to do that,” said David Ross, president of the Duluth Area Chamber of Commerce, who said a strong, financially successful Minnesota Power was critical to the city’s growth.

“If a small increase is needed, so be it,” said state Rep. Mike Sundin, DFL-Esko, representing the Duluth Building and Construction Trades Council of unions.

The utility says 90 percent of that extra money — nearly $39 million annually — will go to pay for major investments in how it generates and moves power to customers. The increase will in part help pay as the utility moves away from coal-fired power plants and toward more natural gas, solar and wind power. The utility also notes that residential customers’ bills have effectively been subsidized by larger users, such as taconite plants and paper mills, saying the new rates would help pare that subsidy.

Three nonprofit “citizens” groups have opposed the rate hike, including the Minnesota Citizens Federation — Northeast, the Citizens Utility Board of Minnesota and Minnesota Interfaith Power & Light.

Testimony is being heard by state Administrative Law Judge James Mortenson, who will consider all input and evidence and submit a final recommendation to the Public Utilities Commission by November. The commission has the ultimate say in the rate hike, probably late in 2017.

In addition to Tuesday’s sessions in Duluth, hearings were held Monday in Eveleth with another planned today at 6:30 p.m. in the Backes Student Center at Itasca Community College in Grand Rapids and Thursday at 5 p.m. in the Morrison County Government Center in Little Falls. Minnesota Power provides electric service within a 26,000-square-mile area in Northeastern Minnesota for 145,000 customers, 16 municipalities and some of the largest industrial customers in the U.S.

Additional written testimony can be sent to consumer.puc@state.mn.us by July 3.

Lisa Kaczke of the News Tribune contributed to this report.