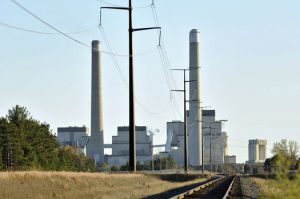 New legislation allows Xcel Energy to build a natural gas plant in Becker, Minn., to replace some of the energy lost when the Sherco Power Plant’s coal-burning units close.

Minneapolis-based Xcel, the state’s largest electricity provider, wants to build a 786-megawatt generator in Becker to partly replace power that will be lost when the company shutters its two big coal-fired plants there. A megawatt is a million watts.

In October, the Minnesota Public Utilities Commission (PUC) approved the closure of the two 680-megawatt coal generators, a landmark for reducing carbon emissions in Minnesota.

The PUC at the time did not seem averse to a gas plant of some sort as a replacement, but it asked for more study of cost-effective renewable energy alternatives.

In January, bills were submitted to the Legislature allowing Xcel to build the new generator. Proponents say the legislation is necessary to stabilize the Sherburne County economy, which will be hurt by the coal generators’ demise.

Opponents say the legislation is an end-run around the PUC.

“This project is of critical importance for Becker and its surrounding area,” Dayton said in a statement. “It requires an immediate certainty that the PUC review process cannot provide.”

Xcel’s coal plant is Sherburne County’s largest taxpayer and employs about 300 people. The new gas plant would employ about 150. It would open in 2025, about midway between the planned 2023 and 2026 closure of Xcel’s coal generators in Becker.

“The Becker natural gas plant is a key component of the Xcel Energy plan to cost-effectively transition our fleet (of power plants) to cleaner and more renewable sources,” said Chris Clark, president of Xcel Energy-Minnesota in a statement. Gas-fired generators produce about half the greenhouse gases emitted by coal-fired plants.

The power plant legislation passed the House by a margin of 80-45; in the Senate, the vote was 39-25. It was amended in the Senate to provide protections for consumers through PUC review of cost forecasts for the new plant.

“We don’t think this is the way [legislatively] to be making these kind of technical power plant decisions,” said Annie Levenson-Falk, executive director of the Citizens Utility Board, a nonprofit consumer advocacy group for energy matters that has opposed the gas plant bill. “That said, the Senate bill has measures to protect ratepayers,” she said. The House adopted the amended Senate bill.

The size of the gas plant should have been determined by the PUC, since costs are ultimately borne by consumers through rates, she said.

Republican Rep. Jim Newberger, who introduced the gas plant bill in the house, said he “was very pleased at the bipartisan work we were able to accomplish.”

“We really needed this bill to go forward to ensure that a power plant stays in the Becker location,” said Sen. Andrew Mathews, R-Milaca, and an author of the Senate gas plant bill.