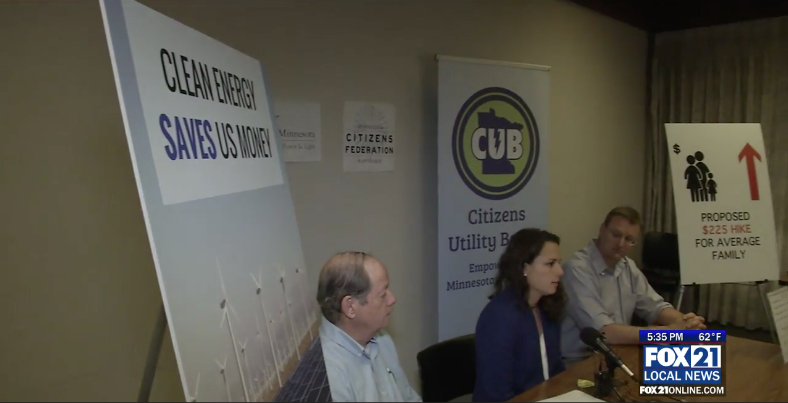 Representatives from the Citizens Utility Board of Minnesota, the Minnesota Citizens Federation NE and Minnesota Interfaith Power & Light voiced their concerns with the proposed hikes Wednesday.

These increases average out to about $225 a year per customer.

According to these advocacy groups, Minnesota Power’s proposals will be a financial burden to low income families.

“People who use less than the average amount of electricity are actually going to face a higher proportional bill increase,” said Annie Levenson-Falk, Executive Director of the Citizens Utility Board of Minnesota. “A lot of that is seniors or low–income families who are already doing all they can to use as little energy as possible, even more of the hike is going to fall on them and that’s especially concerning.”

The Minnesota Citizens Federation has opposed every potential rate increase for more than 40 years, helping to keep energy costs affordable for people with low or fixed incomes.

“There’s always been a continuing problem throughout those years, defending residential rate payers, especially those that use the least from rate hikes,” said Buddy Robinson, Staff Director with the Northeastern Chapter of the Federation.  “Especially when they’re based on the idea of taking costs off of the big industrial customers and shifting them onto residential customers.”

These hikes are only proposed.  The Minnesota Public Utilities Commission has meetings set for next week to get residents’ input.

The meetings will be held June 19th at the Range Recreation Civic Center in Eveleth, June 20th at the Inn on the Lake in Duluth and June 21st at Itasca Community College in Grand Rapids.  Anyone who can’t make it to a meeting is encouraged to contact the PUC directly.