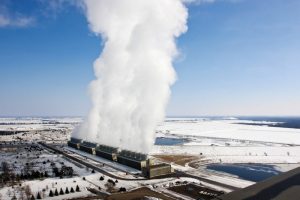 Proposed legislation in Minnesota would allow the state’s largest utility to build a new natural gas plant at the site of the Sherco coal plant, pictured, without regulatory approval.

Two of the leading voices in the debate over legislation involving a proposed natural gas plant northwest of Minneapolis no longer actively oppose the bill.

The Citizens Utility Board of Minnesota has dropped opposition to a bill to allow Xcel Energy to construct a $1 billion, 786-megawatt (MW) natural gas plant in Becker without going through a Public Utilities Commission process required by law.

Another major opponent, the Minnesota Large Industrial Group, will no longer testify against the bill. The ad-hoc organization’s attorney, Drew Moratzka, a partner at the law firm at the Minneapolis law firm Stoel Rives LLP, said that while the legislation “privatizes profits and socializes risk” the large industrial group is no longer speaking against it.

The Senate version of the bill “is somewhat helpful” in protecting ratepayers, Moratzka said. The legislation, if the Senate version moves forward, is expected to be signed by Gov. Mark Dayton.

On February 9, Dayton’s office released a prepared statement which stated the governor had “very serious concerns about other proposals in the Legislature to weaken the Public Utilities Commission (PUC).”

However, he argued that the plant is of “critical importance” to Becker, 47 miles north of Minneapolis, and to the state. The community and Minnesota require “certainty that the protracted PUC review process cannot provide.”

Xcel had announced those units are going to be retired in 2023 and 2026. They collectively can generate more than 1,500 MW of electricity.

The legislation is partly focused on replacing jobs lost when the two units are retired and the income the city and Sherburne County receive from it. An estimated 150 jobs will be created at the new plant, half the number the former two coal units employed.

Critics argue that the bill would set a dangerous precedent by eroding the commission’s oversight of energy matters and allow utilities to potentially circumvent well established procedures for energy construction projects.

Earlier bill versions also called for ratepayers to be potentially on the hook for the cost of the plant, including overruns, said CUB executive director Annie Levenson-Falk.

“We’re not saying the legislature is an appropriate place to look at these projects,” she said. “But these changes should help protect ratepayers.”

One of those changes is requiring that the size of the plant be based on Xcel’s latest integrated resource plan, which must be approved by the commission.

Secondly, the bill allows for “reasonable and prudently incurred costs” to be recovered. If the commission finds unnecessary charges it has the power to deny some rate recovery Xcel may propose, Levenson-Falk said.

Finally, 20 months prior to construction Xcel must file with the commission a forecast of costs which would then be studied by an independent evaluator.

Levenson-Falk points out there’s no definition of what an independent evaluator is or what functions it would provide.

The legislation is unclear as to what will be done with an independent evaluation, added Moratzka. Nor is it clear whether Xcel or the commission will be hiring the evaluator.

The bill also offers a “sliding scale” rate of return proposal to provide Xcel an incentive for coming in at or below projected costs.

What that language means is debatable but the legislature’s desire to have the plant built at or below estimated costs is another protection for ratepayers. If the utility spends too much the commission may not allow it to recover some of those costs, Levenson-Falk said.

When Xcel spent more than double its budget to renovate a nuclear plant in Monticello the commission denied part of its rate of return because of the miscalculation and cost overruns.

“This is all an improvement over the first bill,” Levenson-Falk said.

While the legislation seems a done deal, a handful of clean energy advocates suggest the legislature take a second look.

John Farrell and Karlee Weinmann of the Institute for Local Self Reliance argued in a recent Star Tribune opinion piece that the cost of the plant is staggering for the number of jobs it will create.

They project the cost of the plant will be $800 million, along with another $200 million for additional gas pipeline infrastructure. Fuel costs for 20 years add $5 billion to the total, leaving the cost of each job at $40 million in outlays.

Farrell said in an interview that the unpredictable nature of natural gas prices makes the project risky. Dozens of natural gas plants are being built around the country, he pointed out, so the competition for fuel may dramatically increase its cost.

Clean energy sources have much more predictable fuel costs than coal or natural gas, he noted. Natural gas rates could “go through the roof” as plants compete for supplies.

“There are more cost-effective and cleaner solutions than building this plant,” Farrell said.