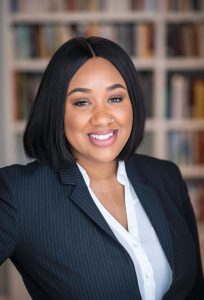 Halston Sleets is a native of Saint Paul and proud third generation Minnesotan. She has a passion for addressing equity concerns through an environmental context and has continually sought to address those concerns by aligning her values with career.

Halston attended Tuskegee University, a Historically Black College and University in Tuskegee, Alabama, where she received a Bachelor of Science in Environmental Science, Plant and Soil Science with a concentration in Natural Resource Management. Upon graduating from Tuskegee, Halston served as a Contract Management Specialist for the National Park Service in Denali National Park and Preserve, in Denali, Alaska. While in Denali, she worked on subsistence hunting policy reform with indigenous communities surrounding the Park.

Halston returned to Minnesota in 2013 and began to work as a Hennepin County in the Department of Environment and Energy. In 2017, Halston completed her Master’s in Science, Technology and Environmental Policy from the University of Minnesota Humphrey School of Public Affairs. She then took on a role as the Senior Policy Aide for Environmental Justice and Sustainability to the Mayor of Minneapolis: Mayor Betsy Hodges. Her work included advancing the Mayor’s sustainability messaging and initiatives for city and continuing to build community around environmental justice issues in Minneapolis.

Halston is now the Associate Manager of Sustainable Tech Products at Best Buy, where she is assisting the corporate sustainability team in developing the strategic direction for actualizing their carbon reductions goals. She also serves on the Minnesota Pollution Control Agency’s Environmental Justice Advisory Board. She is a Board of Director for Minnesota Center for Environmental Advocacy and Minnesota Environmental Initiative. She was selected as a member of the 2018 cohort for 40 under 40 Energy Professionals by U.S Energy News and has been featured in a recent Huffington Post article titled, “Top 22 Black Environmental Leaders in the Country.”